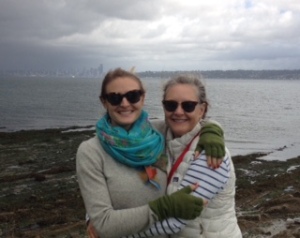 The day I was scheduled to launch my first website I took a moment to google my name. No brainer, just seeing. And there it was — the top five listings were my 24-year old daughter. I had to laugh. Foiled, for all my good intentions. We shared a name, and now, the history of the name problem. I thought I had had the solution. But who anticipated the internet in 1987?

My mother was named “Alexandra” after her mother’s favorite roommate at Smith. The name, of Greek origin, was carried through history by several early Christian saints, the wife of Czar Nicholas II, and many princesses. And me.

The moment my mother arrived back home from the hospital with her little namesake, the problems began. Guess who got the nickname? Blame falls on the delivery doctor, or so the story goes.

“Ma’am!” he supposedly exclaimed, “What a beautiful pink pumpkin you have!”

My mother went by “Alex” but I bore the mortifying nickname of “Pinky” (should I be grateful this wasn’t “Pumpkin?” I am still not sure) until the day my parents pulled me out of public school, halfway through third grade and delivered me, in January, to a private school forty minutes away. I didn’t know a soul. But even at eight-years old I knew this was my big opportunity. I sensed a new beginning. If I could write it, I could be it. When this new girl was asked her name as the first class began, I proudly said aloud “ALEXANDRA!”

What more did third-graders need? I was new and had a name they had only seen in the history books. Tar-get.

”Think you’re so great, Alexander the Great?” “Think you’re a princess, too?” Usually followed by hilarity and hair tossing. Always striking me in the heart. What a way to start.

Gradually, the insults were shortened to “Alex,” faster for children to sling through braces and peanut butter. And that began stage two of the name problem.

When the telephone would ring at home, I would freeze. And sometimes, my mother would hide. When one of us finally picked up the receiver we would often hear,

“Hello is…ugh…umm…little Alex there?” or “Big Alex, is that you?”

Confusion on both ends humming down the curly red plastic phone cord.

In other homes people would shout, “I got it!” when the phone began to ring. In ours we would shout, “I’m NOT getting it!” Who wanted to be the “little” one? And on the other side of things, who wanted to be the  “big” one? Receivers were handed back and forth in fury multiple times a day, and sometimes we didn’t answer the the ringing phone at all.

So when my first daughter was born I had taken notes. We named her “Alexandra” and on the birth announcement,“ Sasha,” the beautiful Russian nickname, was scripted underneath.  Problem solved!

The name “Alexandra” proceeded to reached #26 on the charts for most popular baby names in 1995 and my daughter was grateful she wasn’t one of a million named ‘Allie’ or ‘Alexis.” I was happy we didn’t have phone conflicts. Landlines morphed into cell phones and all was quiet in the name world. Until I wanted a website.

When she began her career after college I never thought to ask what her professional name would be. She, in turn, used her nickname for friends, but her full name on her professional documents. Why not?

I sat at my computer with two minutes to go until the conference call with the web designer, the sizable credit card payment, and my new career as a writer was launched. I was so proud of her. I did not want to do anything to create confusion on her amazing road to success, or begin a muddle on the internet keyboard. Far more complicated than tossing the red phone receiver at each other.

I took a breath. I deleted my last name, my married name, and enlarged the font on my middle name. Willing to nip this historical problem at the bud.

“Alexandra Dane” is all mine. “Alexandra Garfield” is all hers. In some ways, the internet made that easy. ‘Till the next one.

2 thoughts on “A Brief History of The Name.”